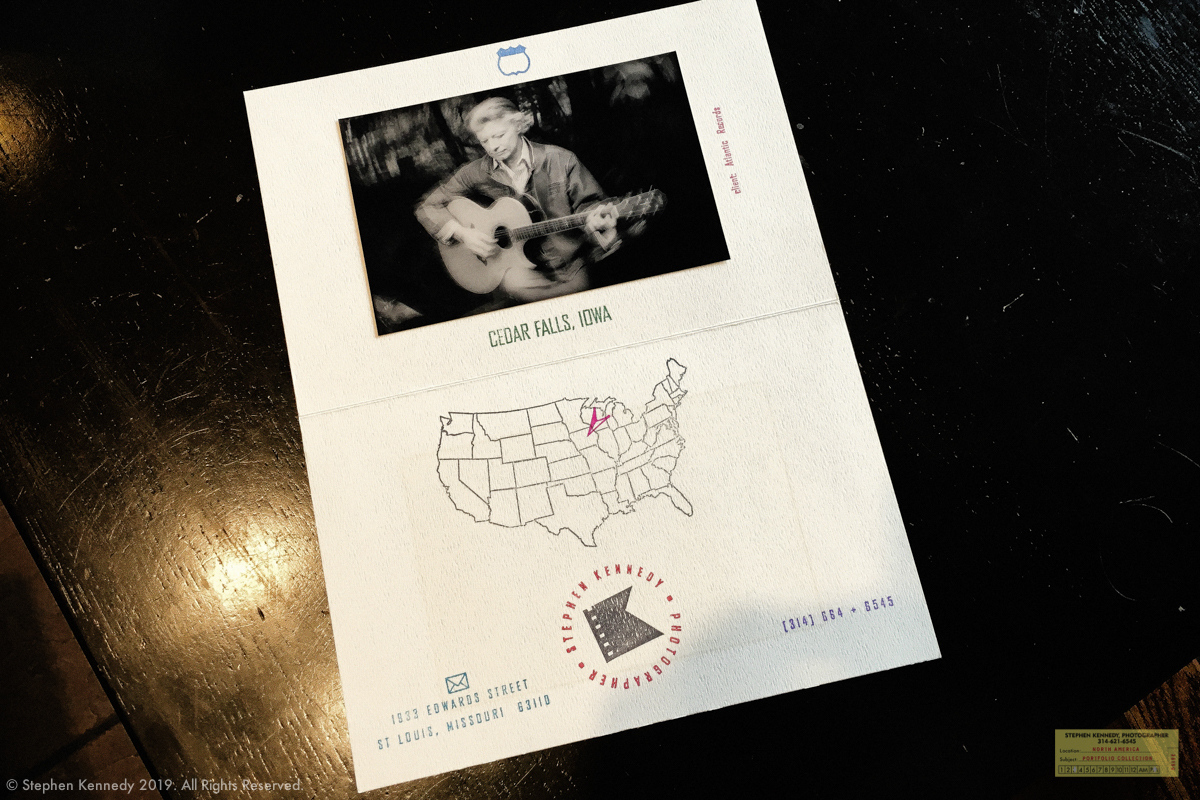 Late last year I re-connected with Bill Tuttle whom I hadn’t seen in years. Bill and I collaborated on a number of advertising gigs.

We were a pretty good match. He’s the kind of creative director that appreciates the art and craft of photography which was always an incentive to me to set the bar high for what I delivered.

Over coffee, we brought each other up to speed on our recent endeavors. As we were getting ready to leave, Bill pulled something out of his case that I hadn’t seen in a long time.

It was a hand-made card that I sent to Bill and a few dozen other creatives as a self-promotional mailer. I won’t say how old it is but it was printed in the darkroom of my first studio in St. Louis’ Italian neighborhood called The Hill.

The photograph is of the novelist Robert James Waller. It was my second photo session with this remarkable artist.

That particular shot was an outtake from a commissioned project for Atlantic Records. The session took place right as Robert was nearing the peak of his fame. He and I had become friends on our inaugural shoot in September of 1992 and for a while I was the only photographer that he would work with.

Robert called me one morning in the spring of ’93 and told me that Atlantic was going to ask me to fly up Iowa right away to do an album cover for Robert’s folk record. He told me that Atlantic would be phoning at any minute and they’ll be offering me peanuts for the gig. I was instructed to tell Atlantic that peanuts are for monkeys and to stop bothering me. He said they’d tell me I was making a big mistake and they’d use every trick in the book to grind me down. Robert told me to stand firm and that eventually they’d pay whatever I wanted and that I should want to get paid a lot.

Like clockwork, someone from Atlantic called offering me a few coins and a metric ton of exposure. I followed the script, but it was hard. 45 minutes later another Atlantic person called and “apologized” for the financial insult and agreed to pay me a king’s ransom for a rainy day shoot with my favorite author.

Robert and I went on to collaborate on a Bridges of Madison County calendar and three more editorial sessions at his ranch in Alpine, Texas.

Robert has been gone since 2017 but he’ll never be forgotten by me.

About the author: I am Stephen Kennedy, an experienced photographer with more than 2300 completed session in all 50 US states.